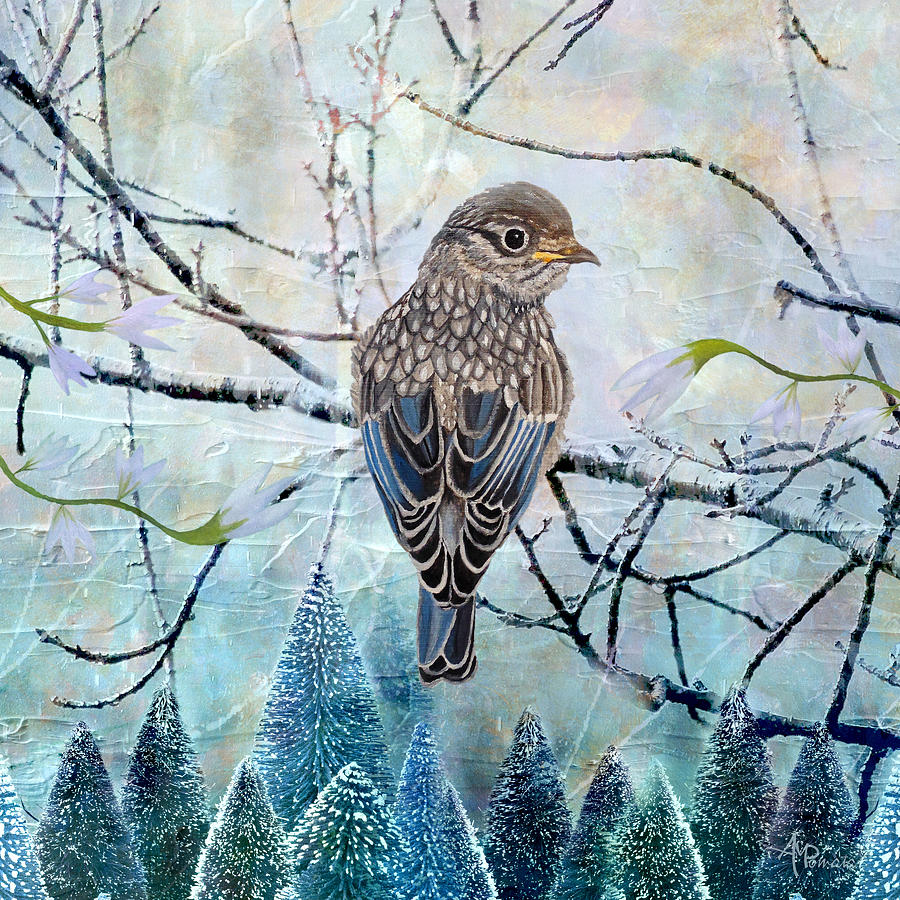 This painting is based on the original photograph 'Fascinating Feather Pattern Of A Juvenile Eastern Bluebird', by Cindy Treger, whose express consent has been requested to use it as a reference.

The original photo can be found here: https://fineartamerica.com/featured/fascinating-feather-pattern-of-a-juvenile-eastern-bluebird-cindy-treger.html

The eastern bluebird is a small thrush found in open woodlands, farmlands, and orchards. It is the state bird of Missouri and New York. The adult male is blue above and with a rusty chest. Females have blueish wings and tail and are grayish above.

Between June and August, the North American populations are usually breeding and the juvenile eastern bluebirds look dusky brown to dark tawny in the upperparts, the blue hues duller or washed grayish, the underparts being dull whitish with dusky spots and streaks. The females' primary feathers usually look dull, dingy grayish with little blue while they are more extensively and brighter blue in males.

They are very social birds. At times, they gather in flocks of a hundred or more, and tend to live in open country around trees, but with little understory and sparse ground cover.

Huge thanks, Wayne!! I very much appreciate it. :))

Thank you so much, Alana!! I very much appreciate it. :))

Thank you so much for your lovely words, Marty!! I truly appreciate them. :))

Excellent color, light and detail in this beautiful winter painting!!...F/L/T 💙

This is so awesome Angeles!! l/f/tw

Thank you so much for your lovely words, Sunil!! I truly appreciate it. :))

So very kind of you, Kent!! Huge thanks for your lovely words. :))

Angeles, this is one stunning work of art - great job. f/l

Huge thanks, dear Cindy!! I very much appreciate it. :))

Thank you so much, Sarah!! Much appreciated. :))

Angeles, this is a beautiful work of art - lovely blues. f/l

Thank you so very much, dear Rosita!! I greatly appreciate it!! :))

Retweeting this wonderful painting my dearest Angeles! So Beautiful !

Huge thanks, my dear friend!! Much appreciated!! :))

Excellent addition to a genre you obviously have mastered. Love the soft blended pastel-like pattern of the background.

Huge thanks, Aberjhani!! I truly appreciate your gracious words. :))

Such a beautiful painting this is, dearest Angeles!!!! The bird is so sweet and adorable, and I love the flowers in the tree, the soft colors and textures in the background, and the trees down below!! It's all just marvelous, my friend!!!! :)))vft

What a lovely and gracious comment, my dear friend!! Huge thanks!! I truly appreciate your so kind words!! :))

This is so awesome Angeles!! I love it! and I love the textures, the background and the trees!! l/f/t

So very kind of you, Linda!! I truly appreciate your lovely words. :))

What a beautiful work of art, love the background, texture and those amazing trees, wow! LF

Thank you so much for your lovely comment, Angela!! I very much appreciate it. :))

Angeles, this little guy is so cute - you captured his expression perfectly. f/l

Thank you so much for your lovely comment, dear Cindy!! I truly appreciate it. :))