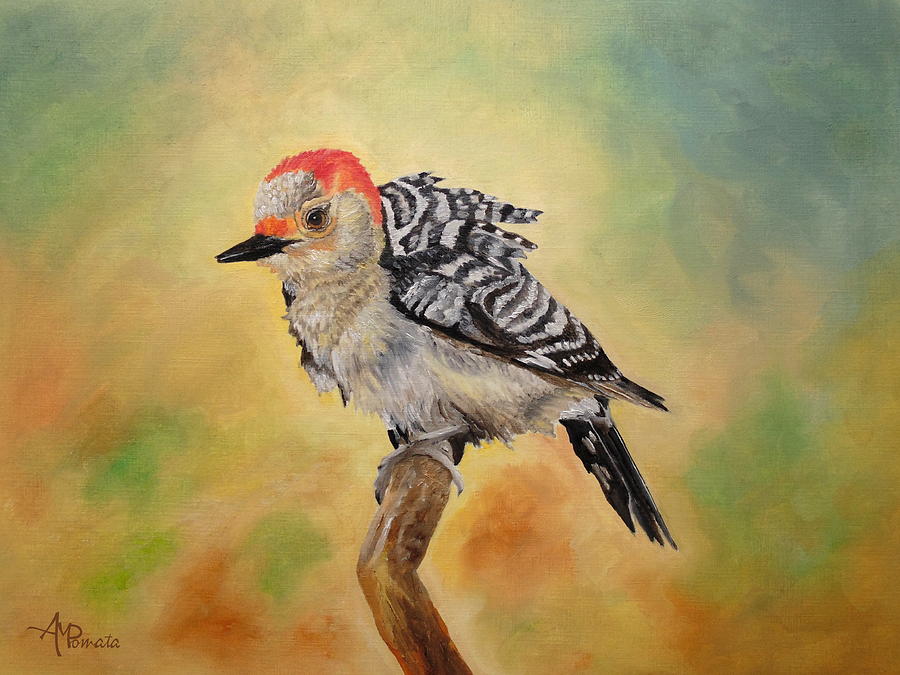 This original painting is currently for sale.   At the present time, originals are not offered for sale through the Angeles M Pomata - Artist Website secure checkout system.   Please contact the artist directly to inquire about purchasing this original.

This painting is based on the original photograph 'Female Juvenile Red-Bellied Woodpecker Fluffing' by Cindy Treger, whose express consent has been requested to use as a reference

The original photo can be found here: https://fineartamerica.com/featured/red-bellied-woodpecker-showing-her-red-belly-cindy-treger.html

The Red-bellied Woodpecker is a medium-sized Woodpecker in the Picidae family. All red-bellied woodpeckers show a black and white barred back, white upper tail coverts, greyish white undersides, black chevrons on the lower flanks and below the tail coverts, and barred central tail feathers.

Despite the name, the red on the belly is often not visible in the field, and the most prominent red part of its plumage is on the head. That is why it is often mistaken for the red-haired woodpecker, a somewhat rarer species that are mostly black on the back with large white spots on the wings. Adult males have a red cap that goes from beak to nape; females have a red patch on the nape of the neck and one above the beak.

It breeds primarily in the eastern United States but has extended its range north to Canada. Red-bellied woodpeckers depend on dead trees for nesting. They also use tree crevices and fence posts to store food for later in the year, a habit they share with other woodpeckers of their genus.

Although they sometimes take over the nest of other birds, they are more often the victims of the aggressive European Starling. Up to half of all red-bellied woodpecker nests in some areas are invaded by starlings.

Red-bellied woodpeckers are noisy birds. your typical call sounds like a churr-churr-churr or thrraa-thrraa-thrraa with an alternate sound br-r-r-r-t. As a curiosity, these birds, more frequently males but also females, often "drum" to attract their mates, hitting hollow trees.

Thank you so much, Sergey!! I truly appreciate it. :))

Angeles, beautiful work of art - you did an outstanding job on her. f/l

Thank you so much for your gracious words, my dear Cindy!! I very much appreciate them. :))

This is stunning artwork, nicely done!

Thank you so much, Sergey!! Much appreciated. :))

Angeles, you did an outstanding job on this little beauty - love it. f/l

Huge thanks, dear Cindy!! I LOVE your stunning photo. :))

Gorgeous work of art. Wishing you a wonderful Christmas and New Year. L/F

This is so kind of you, Joe!! Thank you so much!! Merry Christmas and Happy New Year to you and yours!! :))

This is terrific Woodpecker portrait!

Huge thanks, Sergey!! I truly appreciate it. :))

Excellent detail and color in this beautiful portrait Angeles, a revisit...F/L/T ❤️

Thank you so much, Donna!! I very much appreciate it. :))

Thank you so much, Rebecca!! I very much appreciate it. :))

Wow! I can feel the fluttering of the plumage. Marvelous color rendering and detailing. L/F

This is so kind of you, Sunil!! Thank you so much for your lovely words. :))

Angeles, you did an outstanding job on this little beauty - love it. f/l

Thank you so much, my dear Cindy!! I LOVE your precious photo. :))

A revisit to this very adorable lovely! Created so beautifully, and is so expressive! The sweetness is so magnificent here! Just love it so much, dear Angeles! :)

Thank you so much for your wonderful comment, dear Tejsweena!! I truly appreciate it. :))

Thank you so very much, my dear Cindy!! I truly appreciate

this is really gorgeous! L/F/tw

Thank you so much, Larisa!! I truly appreciate it. :))

This is so incredibly sweet, adorable, and beautiful, dearest Angeles!!!! I love it!! :)))vft

Huge thanks for your wonderful comment, my dear friend!! I truly appreciate it. :))

Magnificent piece of art, dear Angeles! Love this beautiful portrait of the Woodpecker, details and the excellent background! Fascinating artwork my friend!! 💕L/F

I'm so glad you like it, my dear friend!! Thank you so much for your wonderful comment. :))

Thank you so much, Angela!! I very much appreciate it. :))